This is 1 pot cooking at its best everything gets added in step by step and you end up with a deliciously cheesy pasta dish with loads of extra veggies that the kids will love and it’s ready in 30 minutes! 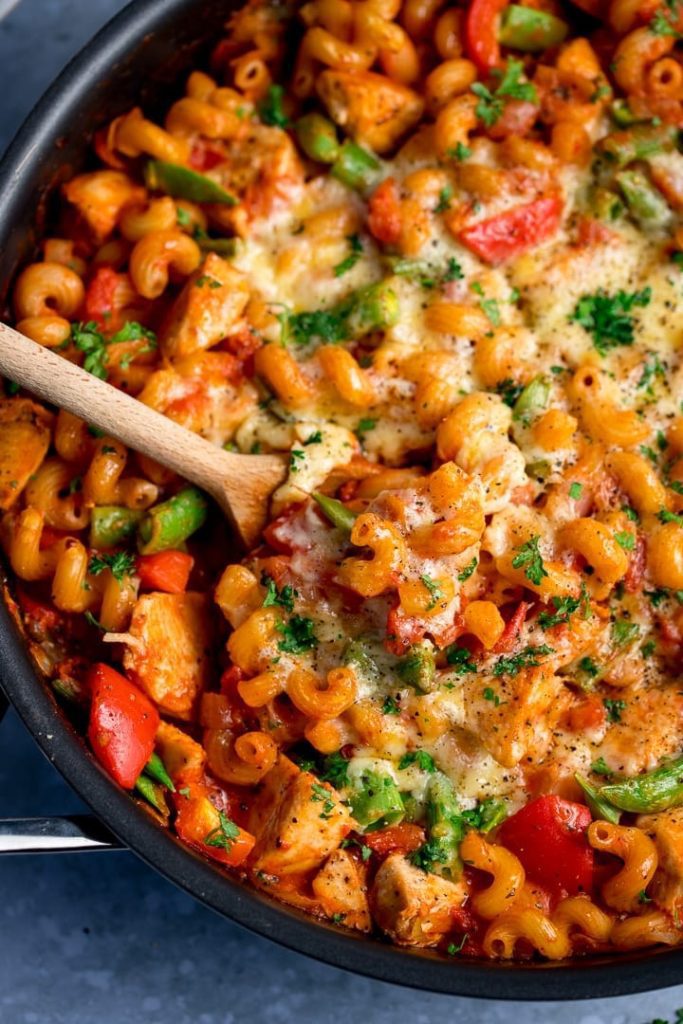 Image by Nicky via KitchenSanctuary

How To Make One Pot Chicken and Pasta

We start by heating a tablespoon of olive oil in a pan over a medium to high heat.

Then we’re going to add a diced white onion into the pan and cook for 5 minutes stirring occasionally until the onion begins to soften.

once those onions have softened we’re going to add in the chicken I’ve chopped into bite-size pieces we’ll add them to the pan.

Add in a quarter of a teaspoon each of salt and pepper and then cooks the chicken for about 3 to 5 minutes until it’s just sealed.

Now we add in two cloves of minced garlic a tablespoon of tomato puree and red pepper that we’ve chopped into chunks stir it all.

Now add in 300 grams or three and a half cups of dried spiral pasta then 2 400 grams or 14-ounce tins of chopped tomatoes, next in goes 1/2 a teaspoon of oregano and half a tablespoon of Worcester sauce.

then we add in 300 mils or one and a quarter cups of chicken stock than 120 mils or a half a cup of full-fat milk.

Stir everything and bring it to the boil and turn it down to a gentle simmer cover with a lid awesome foil and simmer for 12 to 15 minutes checking it occasionally until the kinds of pasta cooked through.

Now we’re going to add in some sugar snap peas, need 20 that we’ve chopped in half so now we gonna add to the pan.

It’s nice to add them right at the end so the hot through but they still retain the crunch.

Stir it then top with 100 grams or a packed cup of grated mature cheddar cheese, that goes under the grill for a couple of minutes until the cheese is melted and lovely and golden.

Sprinkle with some chopped parsley and you’re ready to serve. 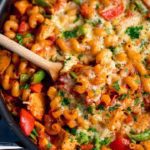 This super quick and easy one-pot chicken pasta ready in 30 minutes or less! perfect for a busy weeknight meal.

Advertisement Jump to Recipe Print RecipeLearn how to make Cheesy Chicken Casserole. This is a...