Today, we’re cooking up a bang bang shrimp. Bang bang shrimp is made famous by bonefish grill and now other places. It is so delicious. So simple to make. I love that the shrimp is crispy. And even with that sauce, it’s sweet, saucy, spicy all the (hisses). 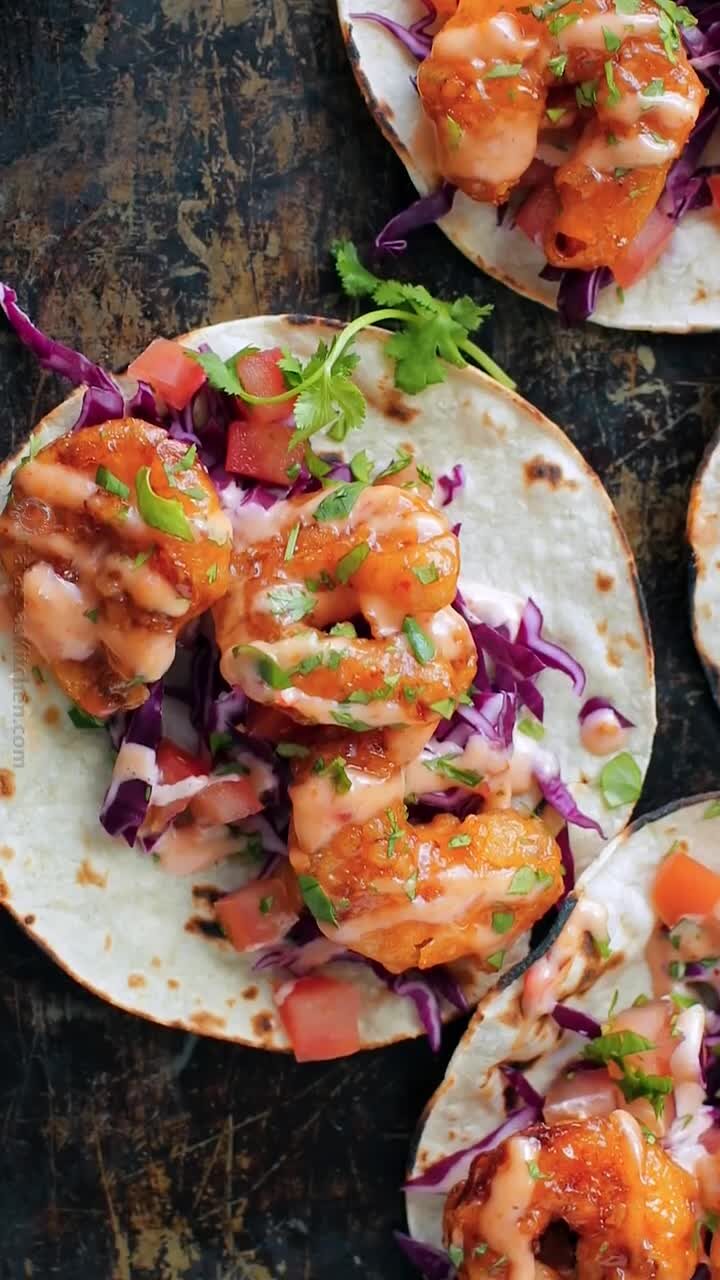 How to Make Bang Bang Shrimp:

Three tablespoons of sweet chili sauce and three teaspoons of Sriracha hot sauce. Or you can add the hot sauce to taste if you like it spicier. And Sriracha is one of my favorite hot sauces.

We also use this in the fish taco sauce that everybody’s crazy about. And personally, I do like to add a little extra hot sauce.

Now, just stir all of that together until it’s creamy and well combined. I love making the sauce first, so it’s ready when we need it.

And you can even make it ahead and refrigerate it. 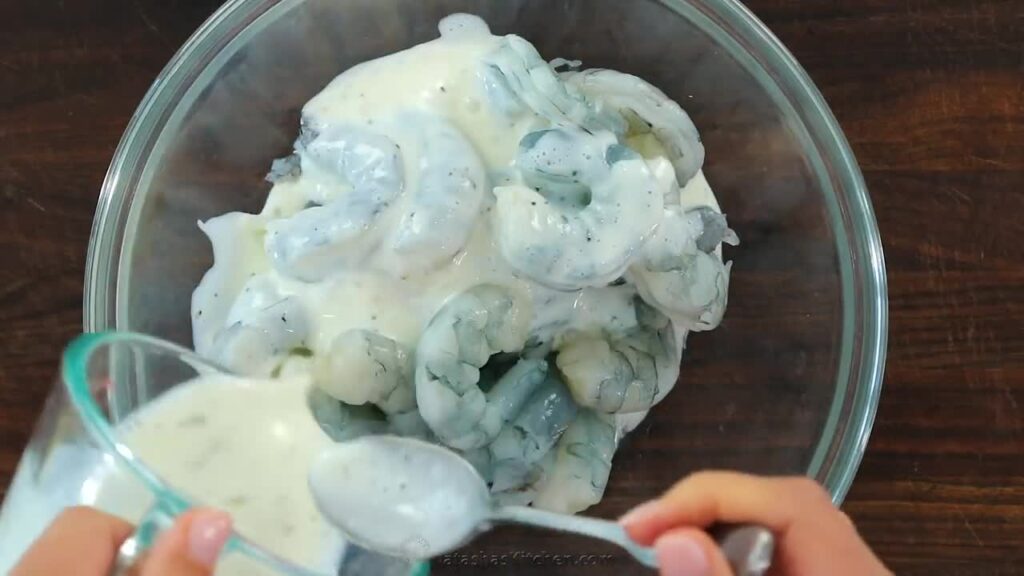 For the marinade, combine half a cup of buttermilk then a quarter teaspoon each of salt, black pepper, onion powder, and garlic powder. Stir that together.

Set that aside for a few minutes while you heat up the oil and we’re gonna set up our frying station.

You’ll need a thermometer to keep the oil temperature steady. And I love this clip on the thermometer because it’s really accurate and I can keep an eye on the temperature of the oil at all times.

This is also the same in the oven thermometer that I use for turkey and other roasts.

Add one to one and a half inches of high heat cooking oil to a pot or Dutch oven and bring that to 375 degrees Fahrenheit over medium heat.

Also, set up a paper towel-lined plate for the shrimp when they come out, and it helps to have a skimmer or a slotted spoon to remove the shrimp from the oil. 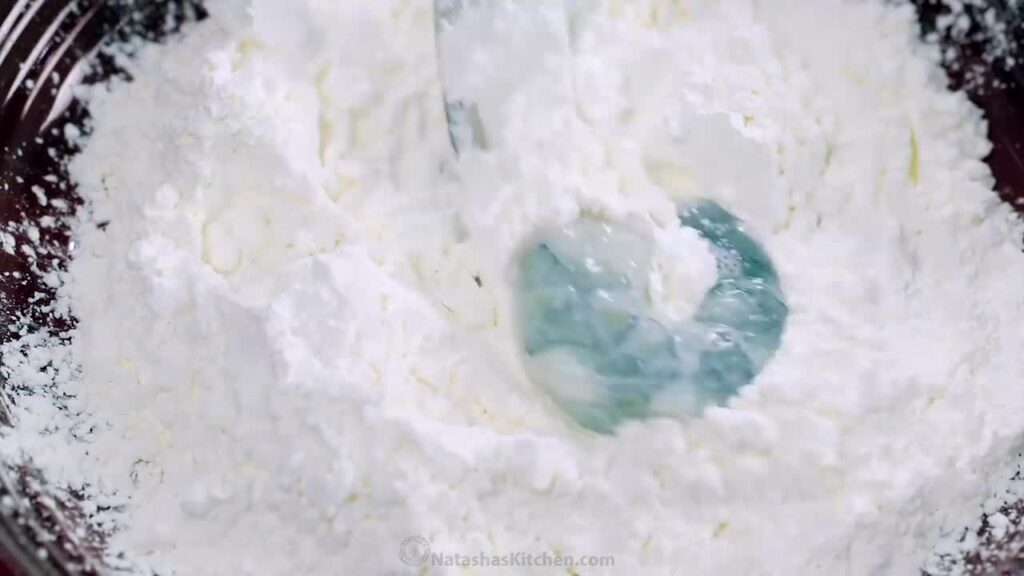 Add a three-fourths cup of cornstarch to a shallow bowl. And now it’s time to bread the shrimp. I like using tongs to keep my hands clean.

Remove the shrimp from the marinade one at a time, allowing the excess marinade to drip back into the bowl.

Dust off any excess cornstarch, then transfer the breaded shrimp to a parchment-lined baking sheet. Because the shrimp cook quickly, I like to have all of the breaded and ready to fry.

How to fry shrimps:

All right, our shrimp is ready and our oil is heated to 375 degrees Fahrenheit.

Now we’re gonna cook the shrimp in about three batches.

It’s important to cook in batches so you don’t reduce the temperature of the oil too quickly.

Fry the shrimp for about two and a half to three minutes or until they’re golden brown and crispy.

Use a skimmer to transfer the cooked shrimp to a paper towel-lined plate. This will help drain off any excess oil.

Make sure to bring the oil back to 375 degrees Fahrenheit before cooking the second batch of shrimp.

Also, be careful when lowering the shrimp into the oil to avoid splatter. Keeping a steady temperature is critical for frying foods. If the oil gets too hot, you can burn your shrimp. Or if it cools down too much, the shrimp will absorb more oil. 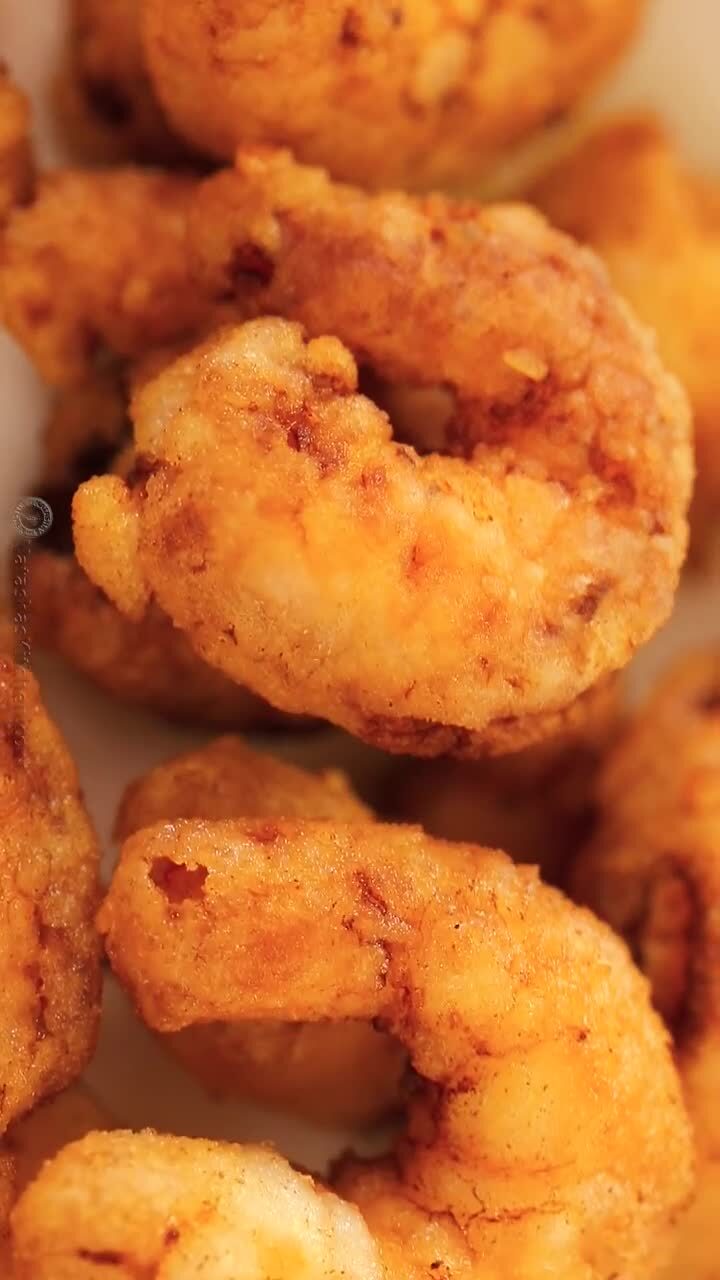 Oh, prepare to be amazed.

I love how these are so so crispy when they come off the oil and they stay crispy. It’s the corn starch. Make these, seriously they’re so crunchy.

Coating shrimps in the sauce: 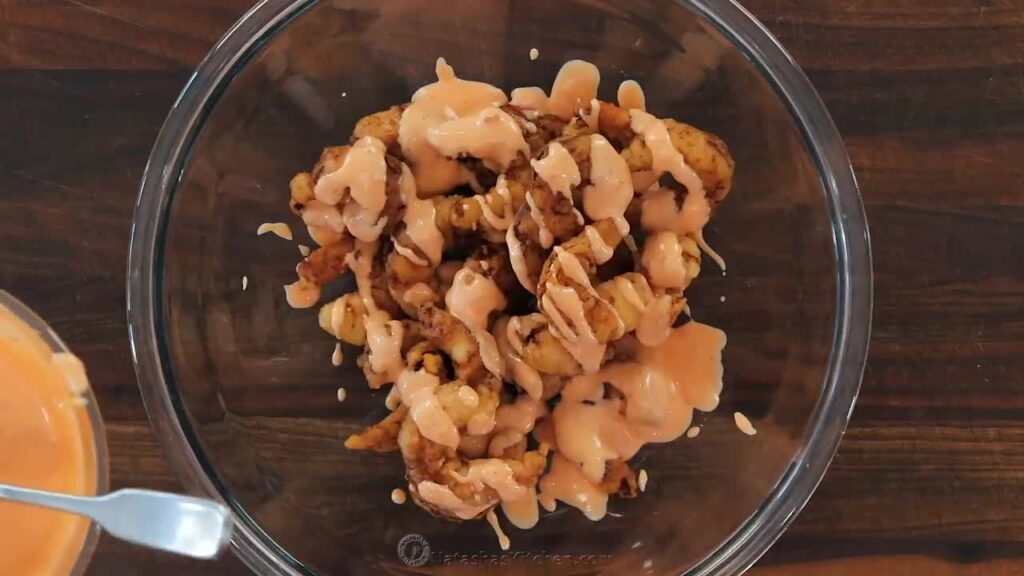 All right. When they’re still warm, you want to put them into a large mixing bowl.

Here comes the fun part. And this is what makes these bang bang shrimp, is the sauce. And it’s ridiculously easy, okay? So just drizzle over half the sauce.

You want to keep the other half to drizzle over your tacos because this also makes the best taco sauce. And it might seem like a lot of sauce, but that’s exactly how it should be because the shrimp absorbs some of the sauce and they get a little bit of like that saucy, but crispy at the same time.

The sauce, whoops, adds so much flavor. Okay and then you can either toss them gently with a spatula. I like using the special because it really gets around the shrimp without breaking the shell.

All right. And just toss them until they’re evenly coated with that sauce and look at how creamy these are. 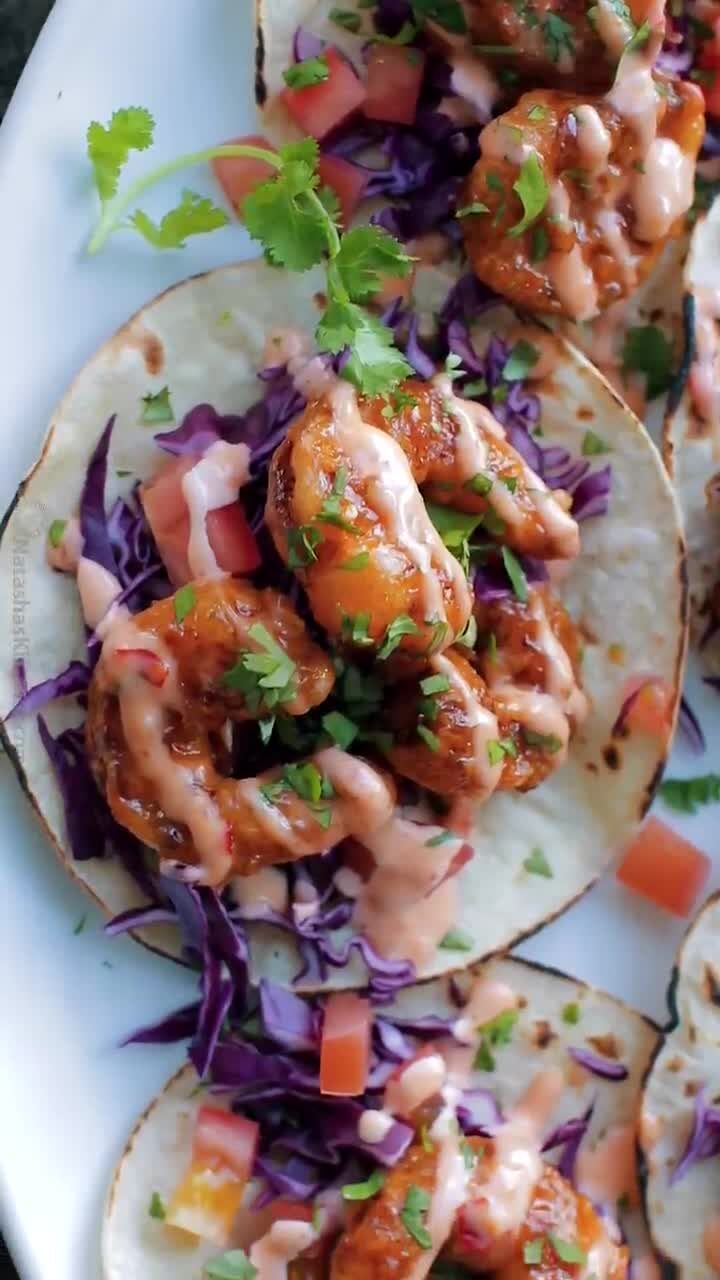 All right. While these sit and rest for a little bit, you want to give them like 10 minutes or so, just so they absorb some of that sauce.

We’re gonna make our taco toppings. And I’ve already got my tortillas warmed up. You can, if you like them charred, you can put them over a gas stove or the grill.

I liked that little charred on the edges look or you can just warm them up on a skillet or a flat top griddle if you have one.

So these are warm and ready to go. And I’m just gonna quickly prep up the rest of my taco ingredients.

I love putting the purple cabbage in because the color just really pops.

And I love the flavor in tacos. Quick tip. This is brilliant. If you ever wonder how do people slice cabbage so thinly?

Use a serrated knife. It just slices so easily and it gets super thin. Perfect for tacos. Watch this. Okay.

And you want to have two to three cups of, probably three cups of cabbage for tacos. And then I’ll grab a bowl.

Keep things tidy. And then also just some fresh tomato. And we’re just gonna give that a quick dice.

Slice it in half, slice it in half again. Definitely helps to have a sharp knife, but if your knife isn’t sharp, a serrated knife is a nice way to also cut tomatoes.

Boom boom boom. We got our tomato. And give our cilantro a rough chop.

You can finely chop it, but use a lot. I love cilantro in tacos. It’s the best.

If you don’t have lime, you can use lemon but I love how lime works with cilantro. The rule is lime and cilantro, lemon and parsley.

All right, then we’re gonna be using that sauce to top the tacos. So you can either put it into a little condiment squeezer bottle or just use a Ziploc bag. Open it up, add your sauce.

Try to get the air out. It’ll squeeze a little bit easier and use some scissors. Then you can just drizzle it over your tacos. Boom. The moment I’ve been waiting for.

How to build a taco: 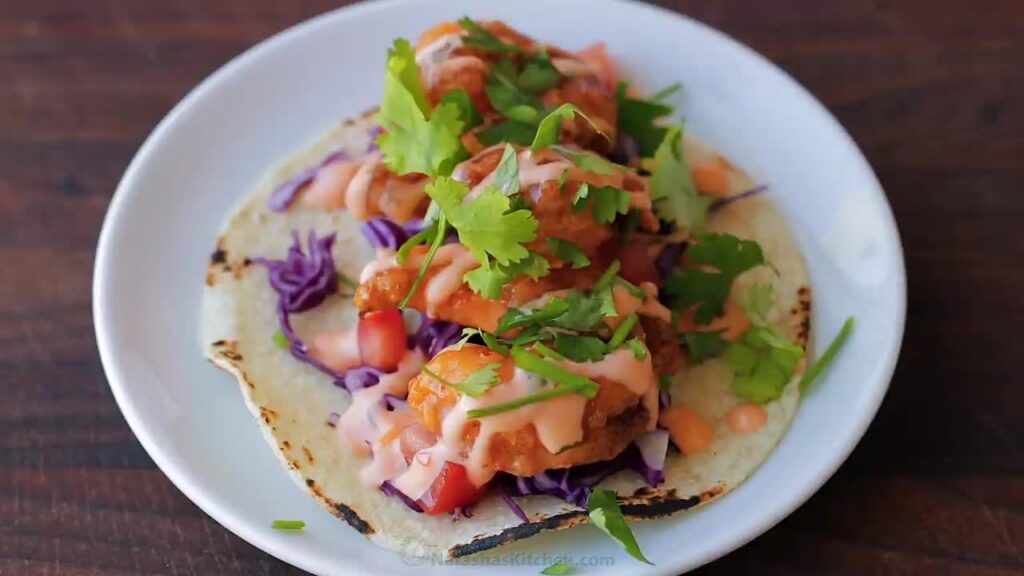 Okay, the tortilla. Here’s how I like to build my taco. Then we’ve got the purple cabbage and look how lovely that is sliced, followed by a generous pinch of tomatoes and then our shrimp.

And depending on your shell, you can do two shrimp or three.

If you do three, then you can make eight tacos. If you do two, you’ll get 12 tacos. So you decide what you want to do and how many people you want to serve.

We’re gonna do it three because it seems like the right thing to do.

And top with a bunch of cilantro, don’t skip cilantro. Then the sauce. And with this, we’re just squeezing generously.

Last but not least right before serving, I love to give it that good generous squeeze of fresh lime juice.

How to Serve Bang Bang Shrimp:

There are so many ways to serve these bang bang shrimp. I’ve seen people put them over salads, over pasta. You can serve them as an appetizer, but this, it has to be my favorite way.

I love all the fresh ingredients with it.

All the flavors and textures in this taco are fantastic. From the crisp sausage shrimp to that fresh crunchy cabbage. And then the extra sauce.

Make this, and this might just become your new favorite. Bang, bang shrimp tacos. 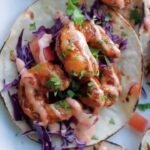 The nutrition label (fat content and overall calories) is only an estimate since it’s difficult to gauge oil absorption for shrimp.

Advertisement Jump to Recipe Print Recipe Probably, you have already tried a lot of recipes for... 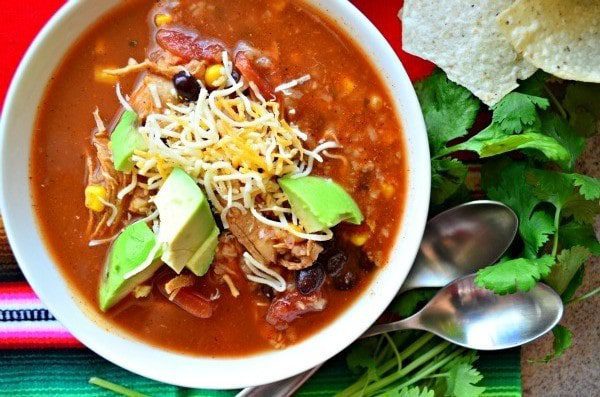 Advertisement Jump to Recipe Print Recipe The chicken fettuccine Alfredo is so creamy and good and...

Advertisement Jump to Recipe Print Recipe Making tacos isn’t that hard. There are a lot of...