Have you ever thought about making Chinese food at home? we’ve got a Szechuan chicken recipe for you. This dish comes from Sichuan cuisine, which its capital Chengdu was declared the city of gastronomy in 2011 by UNESCO.

Sichuan cuisine is known for its bold flavors, especially spiciness and pungency due to the use of garlic and chili peppers as well as the special Sichuan pepper.

Chinese cuisine is one of the few cuisines untouched by western influence. The growing popularity of Chinese cuisine made it famous and global throughout the world.

The fact that Chinese restaurants exist in all the famous and crowded cities around the world had also helped Chinese food to become popular.

It’s not just about Egg rolls and Chop Suey, there are a lot of meals that remain unknown among non-Chinese people.

This Chinese dish could be easily made at home. You don’t have to be experienced in cooking and or have high skills to make Szechuan chicken.

What is great about today’s world is the easiness to find the ingredients needed to prepare this delicious dish.

Ingredients could be easily found in local Asian grocery stores or you can order them via Amazon or eBay.

By cooking this Chinese dish, you will surprise your family and your friends, because it’s rare to make Chinese food at home. Most people eat Chinese food only in Chinese restaurants.

What is Szechuan chicken?

The origin of Szechuan chicken is Chinese, specifically in Sichuan province. Its capital, Chengdu, is known for its culture of highly innovative food.

The spiciness and the hotness of Szechuan chicken are ideal to keep you warm in the winter.

Szechuan chicken leaves a tingly desensitizing sensation in your mouth due to the garlic, chili, and Sichuan pepper used in the dish.

Sichuan pepper is not spicy, but it gives a numbing sensation in the mouth.

The inside of Szechuan chicken is soft while the outside is crispy. Compared to other dishes like Kung Pao Chicken, Szechuan chicken has no sauce, and it’s not sweet like General Tso’s chicken.

Szechuan chicken makes a beautiful combination with steamed rice or dishes that absorb the heat.

What about Hunan Chicken?

Though the ingredients of the cuisine come from the different locations mentioned before, Mala, a hot spice that desensitizes the tongue, binds all the different regions together. Hunan cuisine is simple and pure as well as Hunan chicken.

The most important is that the chicken should be marinated in soy sauce, ginger mixture, and sherry.

What are the differences between Szechuan chicken and Hunan chicken?

Although they share some common characteristics and ingredients, Hunan chicken and Szechuan chicken are different.

The use of vegetables makes Hunan chicken attractive to vegans. On the other hand, Szechuan chicken does not use a lot of veggies.

Due to the brownish color in Hunan chicken comes from a dark brown sauce whereas Szechuan has a red color.

Both chickens are crispy. However, Hunan chicken is crisp due to the vegetables while Szechuan is crisp because of peanuts and sesame used to prepare it.

The technique of preparation

The marinades must be cooked with the chicken and the rest of the ingredients.

What about Hunan chicken?

Hunan chicken could be prepared using various techniques such as stewing, smoking pot, cooking, and frying.

The chicken, in this case, should be marinated for hours or even overnight then deep-fried.

It’s also possible to cook the marinades and the alternative ingredients separately and mix between them when you want to serve.

Arguing about the best dish between Szechuan chicken and Hunan chicken is not constructive. Both dishes have their own traits.

It comes to what you like most, and what you prefer to eat.

How to Make Szechuan chicken

Enough about the differences between dishes. Let us move to how to make Szechuan chicken. If you don’t know about Chinese cooking, don’t exhaust yourself, we’ve got all the things you need.

Some useful tips for Szechuan chicken

● Try to find some fresh red chilis that have a bright color, the most popular are chiles de árbol and cayenne peppers.

Buying chilis that have a dark color, is very dangerous for your health.

● If you want to prepare Szechuan for a special holiday and you need to make a lot, it’s better to use a large nonstick skillet, because it has enough room to crispen the chicken.

You can use a small skillet, but the problem is that this method takes a lot of time and you have to complete it in several batches.

● Serving Szechuan chicken with white rice is very convenient. Especially, when the dish is too fiery for your taste.

Don’t cool down with a glass of water, because it makes things worse. Coffee can solve the problem…

● Szechuan peppercorns cannot be eaten, they are just for the flavor.

● If you want a healthier Szechuan chicken, use half the amount of oil and low-sodium soy sauce. Instead of white rice, eat brown rice, it’s healthier.

A lot of people add more vegetables to Szechuan chicken or other ingredients that are not included in the original recipe of this tasty and flavorful dish.

If you don’t find the ingredients in the grocery store. Order them from Amazon or find an Asian grocery store near you. 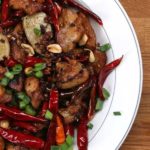 Making this dish requires preparing the ingredients in advance because some of them are not common. We will provide with the list of ingredients to make Szechuan chicken below.

It’s recommended to get dried red chilis with bright color like cayenne peppers or chiles de árbol. Avoid dark red chilis, because the dark color is a sign of excess in storage time which may cause some bad effects on your health.