The Christmas recipe for peppermint bark. This is a great edible gift to give to your work colleagues, friends at school, or anyone else.

It’s really simple to make but it’s delicious and festive.

Peppermint bark is essentially chocolate topped with candy canes. You can make as many layers of chocolate as you would like, I’m sticking with three. Two layers of white chocolate and one of the dark.

How To Make Peppermint Bark Recipe

Start by chopping your white chocolate into smaller pieces. I always just buy the blocks of chocolate but if you would rather you can use chocolate chips, just make sure they are actual chocolate.

A lot of times they are the chocolate compound which doesn’t contain the cocoa butter.

in small amounts, you don’t notice it too much but for this recipe make sure you get the real thing. Once the chocolate is in smaller pieces transfer it into a heatproof bowl.

You can either melt it in the microwave or over a double boiler, just make sure to do it slowly so the chocolate doesn’t burn.

If you’re melting it over a double boiler heat a small amount of water in a saucepan. Once it is boiling place the bowl of chocolate over the top, making sure the bottom of the bowl doesn’t touch the water.

Immediately turn the heat off, the heat trapped in by the bowl is more than enough to melt the chocolate.

While the chocolate is beginning to melt we can prepare the tin.

cover it in a layer of foil so once the peppermint bark has completely set, you can easily just pull it out.

Alternatively, you can just pour the chocolate onto a baking sheet topped with baking paper. I won’t be as uniform but it will still work great.

Stir the chocolate around to make sure it’s melting evenly. When it is completely smooth we’re going to add a couple of teaspoons of flavourless oil, like canola. Stay away from olive oil, as its flavour is too strong.
The oil makes the chocolate glossy and also thins it out so when it comes time for cutting or breaking it up it’s a lot easier.

Stir the oil in until its well combined with the chocolate. make three layers of chocolate, two of white and one of dark so going to use two-thirds of the chocolate now and leave the last third for the top.

Either pour it into the prepared tin or use a spoon or ladle.

Pick the tin up and tip it around until the chocolate has coated the base.

Shake it side to side to make sure it is even and place it into the fridge to harden up.

While it is set up we can get started on the dark chocolate. Cut it up into smaller pieces, this just helps it melt a lot easier and place all of the chocolate into a bowl.

Using the same saucepan as before, make sure the water is boiling. Place the bowl of chocolate over the top and turn the heat off.

While waiting for the dark chocolate to melt, Squish some candy canes.

Make sure they are all unwrapped and place them into a plastic bag. This part is great stress relief. Either use a rolling pin or something heavy with a flat base like a frying pan to begin to smash up the candy canes.

Pour the crushed candy canes out into a bowl.

Once the dark chocolate is fully melted pour in a teaspoon of oil and mix.

I’ve used less oil for the dark chocolate as I’m not using as much chocolate.

Place back into the fridge to set.

The white chocolate from earlier should still be melted, but if it has begun to harden just place it back over the hot water for a few minutes.

Pour it over the set dark chocolate, turning the tin to make sure it is evenly covered.

While the white chocolate is still melted take handfuls of the crushed candy canes and sprinkle it over the chocolate.

It should sink in so when the white chocolate has set it will stay in place.

Place the bark on a chopping board and either break it into smaller pieces or use a hot knife to cut it.

It’s quite rich so don’t make the pieces too big.

If you would like to give it as a gift wrap it up in cellophane and tie a bow at the top.

The peppermint bark will last in the fridge for a few weeks. 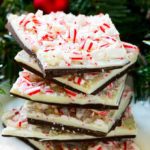 This Delicious Peppermint bark made with white and dark chocolate topped with crushed candy canes. Perfect for Christmas or any parties and gift-giving.